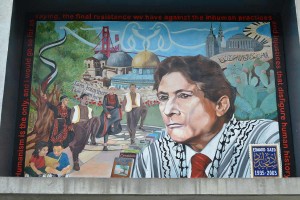 A chasm separates The People

from their rulers, the corporate state.

Dictionaries relate the word mimesis, of ancient Greek origin, to imitation, representation, mimicry, similarity, or the act of resembling. Today, mimesis is most often related to literary and societal functions.

I recently read a study of mimesis as a form of realism in the arts, Erich Auerbach’s Mimesis: The Representation of Reality in Western Literature. By chance my daughter, a professor of literature at Brown University, gave me the Princeton University Fiftieth-Anniversary edition of the book with a renowned introduction by the Palestinian-American scholar, Edward Said.

First published in German by A. Francke Ltd. Co. in Berne, Switzerland, in 1946, entitled Mimesis: Dargestellte Wirklichkeit in der abendländischen Literaturr the book was written while Auerbach, a German Jew, was in exile from Nazi Germany in Istanbul, which for me meant that the writer of this magnificent work had also political objectives in mind. I was struck by a sensation of chance, i.e. destiny, that my daughter chose this particular book and that of all possible places, Auerbach, until 1935, had been a professor of literature at Marburg University, in the small town in central-west Germany where I once lived for a short time and had loved in a special way.

Auerbach’s Mimesis opens with the famous comparison between the ways the world is represented in Homer’s Odyssey and in the book of Genesis in the Bible. Homer relates minor but telling details about people, events and objects, while Moses regularly startles the reader with sudden appearances and representations that one must simply take as given. From the comparison of these two texts the author then builds his unified theory of representation that spans the history of the Western world.

I have turned to Auerbach’s work as a gambit in order to demonstrate that a vast majority of Americans are right not to feel represented by their government, a government allegedly elected in accordance with the U.S. Constitution. That sudden phrase that opens the United States Constitution, WE THE PEOPLE, rings in today’s context like God’s one word to Abraham: “Abraham!”, shorn of all references as to where or who He is. WE The People? We, who? Which people is intended?

Abraham, about whom the Bible reader knows practically nothing, who is to be ordered to sacrifice his son, Isaac, answers simply: “Behold me. Here I am.” Biblical mystery, indeed.

Plato in The Republic has Socrates warn about the difficulty of ever attaining real truth about anything. Socrates’ metaphor of the three beds illustrates the problem of the inevitable degeneration from the ideal to the banal: the first bed made by God is the Platonic ideal; a carpenter then makes a second bed in imitation of that ideal bed; and the artist subsequently makes a third bed in imitation of the carpenter’s imitation of the ideal bed. Subsequent imitators then capture less and less of the ideal. They might graze the reality of a carpenter making a bed or of an artist painting a carpenter making a bed, but they can never attain the true ideal of the original creation.

In the same way, a poetic framer of a constitution may depict images of the virtue of a person, of a people, but can never attain the reality of just who, where and how The People are. Obviously the framers of the U.S. Constitution and the Bill of Rights never conceived of, nor even searched for, the reality of The People. Nor of Democracy itself for that matter. As far as they were concerned both could have been mere legend.

Today, as then, a chasm separates The People from the clique of their rulers, the corporate state. As Auerbach points out, real, historical themes (and real events) are actually unfit for true representation. Slogans of propaganda are instead concocted through the crudest simplification, destined from the start to be distant from the truth.

For example, the word Democracy does not appear in the 4400 words of one of the shortest Constitutions ever written, the Constitution of the United States of America. That nation, “our” nation, is a Constitutional Republic. The USA, one should remember, does not have a monopoly on the word Democracy. In fact it has no just claim to possess the Democracy that it loves to export and jam down the throats of other peoples. Several years ago I read a study of the degree of Democracy in the world’s democratic countries, based on a number of criteria denoting the quality of Democracy in each; the United States of North America ranked number 16, the German Republic number 1.

Today, Republics abound in Europe, Africa, Latin America, the Islamic world, Asia. The official name of North Korea is The Democratic People’s Republic of Korea. Also the Haiti of Papa Doc Duvalier was a Republic. The list goes on to include many corrupt and bloody dictatorships and foreign-dominated, anti-democratic states. Many republics have little or no relationship whatsoever with the concept of Democracy.

Mimesis is thus much more than a certain adjustment of reality by a certain amount of exaggeration, as one observer has noted, in which the nature of the object undergoes minimal change. In its full meaning, mimesis frames real and true reality in such a way that underscores the unpleasant reality that existing named concepts, so modified, so warped, corrupted and debased, such as The People and Democracy and Freedom, are simply not real. The concepts have become fraud and lie, the paraphernalia of legend and propaganda.