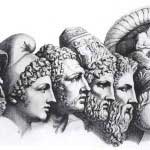 
Hubris in ancient Greek referred to excessive behavior or lack of measure, transgressions for which the gods punished offenders.

Though ancient Greeks as a rule applied these dramatic words to the individual—Antigone’s flaw was her stubborn loyalty for which she paid with her life—we today apply these words also to entire societies or nations. We can label Europe’s hubris its Eurocentrism; its hamartia (for which the ancient Greeks would perhaps punish it collectively), is its destructive nationalisms on the one hand, and its contemporary subservience to America on the other. END_OF_DOCUMENT_TOKEN_TO_BE_REPLACED