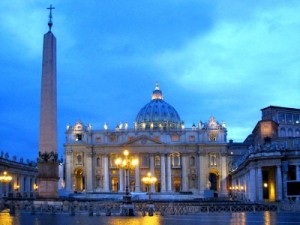 The worldwide influence of the Roman Catholic Church emanates from the Holy See,which is the Church’s central government headed by the Pope and physically located within the territory of the Vatican State inside the city of Rome with a population of 821. The Holy See has diplomatic relations with world nations which maintain two separate embassies in Rome: one to Italy and one to the Holy See. Now why the hell, one wonders, should Argentina or the USA, China or Gabon maintain diplomatic relations with a church? Likewise the Holy See has its embassies around the world, the nunciatures, while from day to day the Roman Church insists on meddling in Italy’s and world affairs. Today the Roman Catholic is effectively blocking new legislationon on same sex marriages and concommitant rights in Italy and other countries. One of the first demonstrative acts of each new pope is a triumphant cortege through the streets of “Italy”, just across the Tiber River from the Vatican.