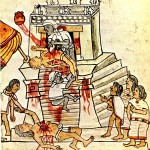 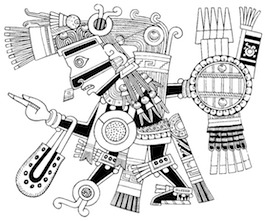 “The Fifth Sun” – an unusual title for this unusual, enthralling and deeply moving novel by Gaither Stewart, set in Italy and Mexico, two of the several countries in which Stewart has spent significant periods of time.Stewart’s four main characters in “The Fifth Sun” are each, in their different ways, dissatisfied with modern life. Each of them searches for greater meaning and purpose in their lives – a search which leads them to make changes, reject their former lives and seek some kind of ‘salvation’, including also through sacrifice. Each person is of different origin and their quests take place against the backgrounds of Catholicism, traditional Mexican indigenous beliefs, agnosticism and atheism. Their individual searches begin in Italy and arrive at vastly different and unexpected outcomes in Mexico.

Mexican Diego, gay and at the beginning of the novel in the process of being confirmed – in St. Peter’s in Rome – as a priest in the Catholic church, comes from a rich and large aristocratic family, the de la Vega Salinas. His future has been mapped out for him by his grandfather: “Diego Fernando would be the family priest. The others were lawyers, doctors, bankers, industrialists. But Diego would be the guarantor of salvation for the entire family … a priest in the family would be redemptive for all”. Diego is confused, not only by his sexuality, but because from childhood he had been immersed in pre-Hispanic history and culture, the passion of his anthropologist grandfather – and yet it appears he is destined to serve the god of the Roman church: “The world of trinities still confused his mind and his spirit —on one side, Tezcatlipoca, Huitzilopochtli and Quetzalcoatl and on the other, the Church’s God the Father, Son and Holy Spirit. He read of the peregrinations of Saint Francis and simultaneously the stories of the Méxica heroes— the death of the last Aztec leader Cuauhtemoc and the man-god of light, Quetzalcoatl, for whose return they waited”.

Diego’s father was pro-Yankee, rejected traditional Mexican culture and for a time even admired Hitler. But lying on the cold marble of St. Peter’s, Diego “perceives in his groin the existence of another self. Under his Church habit lives a rebel”. Diego’s rebellion eventually takes him back to Mexico and to work in a slum, where he finds peace and fulfillment at last.

Originally titled Walks of Dreams, The Fifth Sun actually predates Stewart’s major work – his political spy thriller “The Europe Trilogy” – of which the first two parts:The Trojan Spy and Lily Pad Roll have already been published by Punto Press, while the third, Time of Exile, is about to appear. The earlier work differs from the trilogy in being essentially “apolitical”, being more akin to Stewart’s rich collection of short stories, in which character and place are predominant – with the story line seemingly emerging from the characters themselves and their interactions, with the author being ‘merely’ an observer (but what an eye he has).

In the creation myths which were preserved by the Aztec and other Nahua peoples, the central belief was that there had been four worlds, or “Suns”, before the present universe. These earlier worlds and their inhabitants had been created, then destroyed, by the catastrophic actions of leading deities of the Aztec pantheon. The present world is the fifth sun, and the Aztec saw themselves as “the People of the Sun”, whose duty was to wage cosmic war in order to provide the sun-god with his tlaxcaltiliztli (“nourishment”). Without it, the sun would disappear from the heavens. Thus the welfare and the very survival of the universe depended upon the offerings of blood and hearts to the sun. Should these sacrifices cease, or should mankind fail to please the gods for any other reason, this fifth sun would go black, the world would be shattered by a catastrophic earthquake, and the Tzitzimitl (the stars) would slay the current sun-god Huitzilopochtli and all of humanity.

Similar traditional beliefs in a succession of ‘ages’ are found widely across the world – the four ages of man of classical Greek mythology, with the first ‘Golden Age’ of peace, harmony and prosperity being succeeded by progressively less perfect ages (Silver, Bronze, Heroic, Iron), the last-named being a period of ultimate decline. Analogous myths from the Vedic and Hindu cultures of southern Asia saw history as cyclical, made up of successive ages known as ‘yugas’, and with an alternation of ‘dark’ and ‘golden’ ages. The Kali yuga (Iron Age), Dwapara (Bronze Age), Treta yuga (Silver Age) and Satya yuga (Golden Age) correspond to the four Greek ages. Similar beliefs occur in the ancient Middle East and throughout the ancient world. They were also reintroduced – with modifications – into European culture in the 20th century through the teachings of the theosophical and anthroposophical movements.

Two concepts are fundamental in all these belief systems, even if in some the cycle merely repeats itself endlessly: that of development, change or evolution (whether at the individual or societal level); and that of the necessity of sacrifice (again, either personal or societal, or both) to achieve that evolution. No growth without change; no gain without pain. But in our modern world, real change has become unwelcome – the desire is for a continuation of the status quo, at least for those who are already comfortable.

Lines from Joni Mitchell’s classic “California” come to mind: “Sitting in a park in Paris, France/ reading the news and it sure looks bad./ They won’t give peace a chance/ that was just a dream some of us had./Still a lot of lands to see/but I wouldn’t want to stay here/it’s too old and cold and settled in its ways here …”, ‘here’ being Europe. But hasn’t America, too, and most of the “developed” world, become “old and cold and settled in its ways” – in the ways of consumerism, of pseudo-democracy, and of neo-imperialistic warmongering? Didn’t the commitment to “life, liberty and the pursuit of happiness” inevitably induce a focus on self-gratification, on the accumulation of possessions and wealth, and a forgetfulness of the goal of personal and spiritual development which gave meaning to earlier cultures and which saved them from crass materialism (at least until their decline)?

However barbaric the practices of the ancient sun-worshippers now seem, there was meaning and purpose in the people’s lives. Their societies were well-organised and socially integrated – perhaps because there was not the sense of individual freedom which has been an essential part of the European heritage at least since the classical Greek time (hence the birth of democracy there). But freedom is a two-edged sword – a blessing and a curse – because with it come conscience and moral responsibility (a experiential reality, despite the attempt by philosophical materialism to deny this, as it denies meaning and purpose in the universe altogether).

Freedom and responsibility. The awful tension between them is experienced by each of the characters in The Fifth Sun. For three of them, there is a resolution. Stewart leaves the reader to ponder the fate of the fourth.