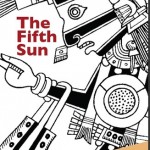 As of December 25, 2013 Lightning Source, a division of Ingram, has  begun distribution of our title THE FIFTH SUN, by Gaither Stewart.  The  Amazon.com (USA), Barnes  & Noble and other online distributors’ pages are currently being populated with the book’s metadata. International outlets in Britain, Germany, France, Italy, India and other countries are expected to follow suit in January 2014.
The Amazon details are as follows:

The novel, The Fifth Sun is set in Italy and Mexico. It is a story of love and disenchantment, of belief and unbelief, adventure and romance. Above all, it is the story of the search of each of us for our real and better selves.

[pullquote]“You can’t compare Mexicans to Americans or Europeans. How can you compare with the rest of the world a country that counts its people according to those who wear shoes and those who go barefoot? The latter are Indios. Ten million of them. They believe blood means new life. Blood nourishes the Earth. We Mexicans are more Indio than Spanish. More Aztec than Catholic.”—(Diego de la Vega in The Fifth Sun)[/pullquote]

The characters in The Fifth Sun are haunted by the Divine. Whether in Italy, Mexico or the United States, they are trying to distinguish between dream and reality, the transient and the transcendental. Sexy, studious but insecure Sarah, an Italian born American; her Italian painter-lover Michele; the Mexican Diego, a reluctant Catholic priest who, because of his homosexuality, says he has to leave the Church in order to become a believer, and the playboy-womanizer, the adventurous American expatriate in constant battle with alcohol, and the wealthy Robert Jay, all have a divine discontent which forces them to go beyond the role life seems to have assigned to them. And there is perhaps the key: the attempt to escape one’s destiny and create a new one.

Sarah leads a pilgrimage from Rome to Mexico and into the mysterious beliefs and rites of Mexico which she encounters there. For one reason or another, the others follow mentally fragile Sarah, trying to save her from her inevitable disintegration and save themselves also by a new integration. They all find their identity in a Mexico City shantytown.

Gaither Stewart brings Italy, his native United States and, particularly, Mexico, contemporary but timeless, to vivid life. Through the convincing four major characters, plus a colourful canvas of secondary supporting characters, unique scenes and conversations, he conveys beliefs without boredom. The Fifth Sun is a wide-ranging novel of well-heeled characters who run risks to find how they should live their lives.

An accident in her apartment in San Miguel Allende leaves Sarah badly burned and accelerates her final mental breakdown and reunites the group around her in a Mexico City hospital: she, Michele and Robert Jay, and Diego, the ex-priest and his companion Raùl now working together in the shantytown in the outskirts of huge, sprawling Mexico City.

Sarah, at the end of her search for “the top of the world” vanishes into the jungle of Chiapas or perhaps on into Guatemala, while faithful Michele joins Diego in the shantytown to wait for Sarah’s eventual return and help in his mission among the poor, who in turn become the subject of Michele’s painting in which he has long sought real reality. Robert Jay back in his New York apartment has found reasons for the good in life in the love of a woman and in his financial support of Diego’s shantytown project to aid the poorest of the poor of ancient Mexico.

Critical acclaim
The reception for The Fifth Sun has been extremely warm.
Henry Vermillion, a Mexicologist,  reflects the consensus:

“There are a number of novels set in Mexico by English-speaking writers which stick in my memory— those of D.H. Lawrence and Graham Greene come to mind.  I read those before coming to live in Mexico some twenty years past.  After living here some years, I had the opportunity to read “The Fifth Sun” in manuscript, and the scenes of Mexico in that novel remain in my head more vividly than any of the others.

Gaither Stewart’s scenes stay with the reader; they get under your skin. The opening of this wide ranging story puts us into the aching body of a young Mexican; he lies prostrate on the cold marble floor of St Peter’s basilica in Rome. He is being ordained a priest, and he is fighting his need to move his rumbling bowels: masterfully done.  The section in which the foppish American writer Robert Jay loses his big sheep dogs to an unknown killer reminds of the death of the doctor’s dog in Kundera’s “Unbearable Lightness of Being”. To me, the most impressive and wrenching section takes place in one of the steaming underground worlds of make-shift shacks and ramshackle illegal homesteads in the heart of Mexico City. The young priest goes there to minister to the poor. I personally have knowledge of more than one of these “irregular” areas in that sprawling city:  Stewart gets just right the claustrophobic atmosphere and the sense of lurking danger which permeates these places.

(Henry Vermillion is an artist: painter, actor, and the former editor of an arts magazine. He has lived for decades in San Miguel de Allende in central Mexico and knows intimately Mexico and much of Latin America.)