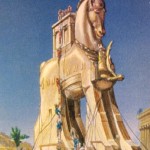 The Cold War spy, Anatoly Nikitin, describes the spy as the eternal child who lives a fairytale. He tells his young protégé, the German-Italian, Karl Heinz, that though convictions and ideology count, in the long run the spy’s disease consists of skepticism and cynicism and the good life which replaces ideology. The spy is only troubled by the ambiguity of concepts like loyalty and treason. Treason against whom?