We are gratified to see Andrei Martyanov. a man we deeply appreciate, filing a much needed review on the ironically titled The Russian Peace Threat. I say “much needed” because this volume has had an unusually hard liftoff. As befits a book telling the truth about the Cold War in a new atmosphere of manufactured all-out russophobia, Ron Ridenour’s ambitious volume on the history of Soviet-American relations (and everything else surrounding such) has met with a wall of silence, censorship and studied indifference. Even the publication of uniformly rave reviews by respected progressive anti-imperialist voices such as Dave Lindorff, The Saker, Dan Kovalik, and John Rachel, among others, have failed to turn the tide. In that manner the story of the most important events of the 20th century, told by a uniquely positioned witness with a lifetime of work and direct participation in such struggles, is being buried before our eyes, precisely as the unfeeling, parasitic and above all robotic United States of Borg (as Kevyn Jacobs accurately called it),  continues its march toward a nuclear Armageddon. If you haven’t read this book, do yourself a favor and get it today. It will be one of the best additions to your personal library in many years. And be sure to discuss it with kin, friends and workmates. We are in an epochal, historically unprecedented, and—no hyperbole here—impossibly high-stakes battle of communications we cannot afford to lose. This book is precisely the kind of ammo we need for that struggle. Use it well. —Patrice Greanville, Editorial Director 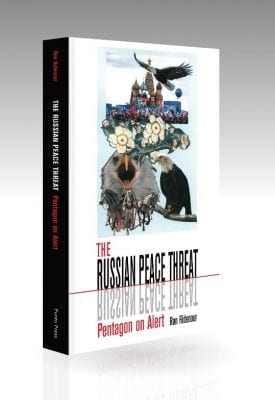 I am not good at writing reviews for anything, unless it is some kind of military or geopolitics related matter, but Ron Ridenour’s book The Russian Peace Threat: Pentagon On Alert is one of those cases when a review must be written. A very positive review at that. Ridenour book’s title is not sarcastic, it is a reflection of a reality of the nature of the Cold War 1.0 slowly transitioning to Cold War 2.0 as was and is seen not only from within the Soviet Union, but was seen by many people around the globe who remembered the horrors of WW II and were aware of the price the Soviet people paid in ridding world of the Nazi scourge.

Ridenour’s book to a large extent is about it. Not surprisingly, when writing about Yuri Gagarin he stresses the horror of war Gagarin and his family, as millions upon millions of Russian families, went through. He is also not surprised with the cynicism of modern Western mass-media which on the 50th Anniversary of Gagarin’s historic first, tried to, entirely expectedly, downplay or ridicule his achievement, reducing it to merely a propaganda coup. It is a well-established pattern today of the US military-intelligence-media complex which goes out of its way to obfuscate or completely eliminate political, military, industrial and scientific realities of the world outside the borders of the United States and its vassals in Europe.

Ridenour goes in depth when tying together the significance, and not just the scientific but humanistic aspect too, of Gagarin’s space flight and the revolution in Cuba which was precipitated by conditions which forced Castro’s revolutionaries to define Cuba as “the brothel of the Western hemisphere.” One, of course, can find oneself debating this point but even radically anti-communist commentators, such as National Review’s own Andrew Stuttaford had to admit that “There was, to be sure, a great deal that was wrong—badly wrong—with Cuba before Castro’s revolution.” This is an important point, once one reads through Ridenour’s excellent summary of the American activity against Cuba under the pretexts so well known by now: American exceptionalism, also recognized around the world as American imperialism. At the time of Gagarin’s flight and the Cuban Revolution, American Imperialism was “fighting” the grossly exaggerated threat of Communism.

In the end, the Cuban Missile Crisis didn’t just happen as a result of the US’ anti-Cuban activity; it was precipitated by a chain of events, which today, barring some important technological differences, repeat themselves almost exactly—the United States thinking that it has the right to deploy its nuclear weapons anywhere without considering the opinions of anyone. As the United States abrogated, first, the ABM Treaty, then, more recently, the INF Treaty and now, in the words of national Security Adviser John Bolton, warning that the United States will not extend START, the pattern of recklessness remains unchanged throughout the decades. Ridenour’s narrative of the events surrounding Cuba more than 56 years ago gives an excellent insight into this self-replicating mechanism of terror and nuclear war threat. 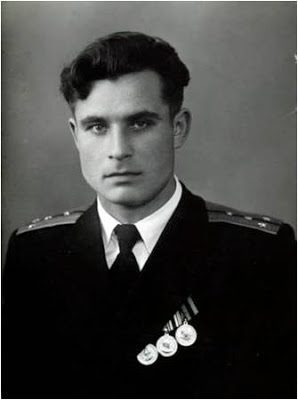 I cannot remain impartial to Ridenour’s book, a large part of which is dedicated to a man I had the privilege to know personally, however fleetingly, under existing conditions of strict military regimen, and study under his leadership and command as Superintendent of my Naval Academy in Baku, Vice-Admiral Vasily Alexandrovich Arkhipov (left). At the time of Cuban Missile Crisis Arkhipov was Captain 2nd Rank, Chief of Staff of 69th Brigade of the Submarines of the Northern Fleet and he was not known to the world at all, unlike it is today, him being credited and not just by Ron Ridenour, with saving the world then, in 1962, through his professionalism and cool head under extreme of conditions, from a nuclear holocaust. The pages dedicated to Arkhipov bore an immense personal significance for me.

Ridenour’s documenting of the evolution of American Imperialism of the 1960s, to its newer, much less competent and thus more dangerous modern-day version, from US unleashing the bloody war in Syria to a blatant neo-Nazi coup in Ukraine, is excellent. It shows a continuity of American exceptionalist views, based, to a large degree on a complete [and characteristically arrogant] ignorance of Russian history, culture and intentions. As one of the fathers of the American “realist” (supposedly “better” than neoconservative) school of thought, Hans Morgenthau stated in 1957:

I would say, and I have said many times before, that if the czars still reigned in Russia, that if Lenin had died of the measles at an early age, that if Stalin had never been heard of, but the power of the Soviet Union were exactly what it is today, the problem of Russia would be for us by and large what it is today. If the Russian armies stood exactly where they stand today, and if Russian technological development were what it is today, we would be by and large confronted with the same problems which confront us today.

Overall, Ridenour does an excellent job showing that the whole post WW II period for the United States was not about Marxism, Communism or any other “ism” which could and often was misconstrued as a threat—it was about unrestricted Imperialism. It was also keeping people inside and outside the US completely oblivious to the facts “on the ground” which for the last 70+ years were about the effort of the Soviet Union and now Russia to maintain peace against all odds, the reason why Russia remains a clear and present danger to the American military-political-industrial establishment.