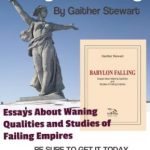 HELP ENLIGHTEN YOUR FELLOWS. BE SURE TO PASS THIS ON.

The Hammer and the Chisel Gaither Stewart’s Babylon Falling is unusual in that the author has assembled a collection of twenty-four plus one essays, thought pieces and articles, which, taken together, form a step-by-step intellectual autobiography that reflects and relates the story of his own social-cultural-political development. In his proposal to the publisher the author in his usual manner of self-doubt expressed the hope that in this, his attempt to recreate one life, he had not forgotten the essentials as shown by Jorge Borges in his poem La Luna of the man who after he had completed his full summary reconstruction of the world looked up at the disc in the sky and, stunned, realized he had forgotten the moon. These two dozen pieces too will omit many pertinent elements of a life, Stewart warns; yet, he makes a valiant effort to offer the essentials of his own as a possible roadmap to calm introspection according to what Plato, among others, regarded as the fundamental values that constitute a moral person. The unexamined life is not worth living, Plato opined, and in that he was also categorically right.

“From the start of this work,” Stewart writes in his preface “…my most fervent hope was and has remained to assemble a collection of essays and articles that particularizes some of the stages of one man’s search first for rebirth and then transformation from one life stage to a higher level of consciousness, forever aware however that I was dealing with the same raw material, the same stuff of which I was made as a young man, which I had nonetheless come to believe could be reshaped into an ‘I’ who saw reality for what it was and wanted to contribute to changing above all his own ‘I’ and as a result his own reality.

I have in mind instead the ignorance of the sophisticated and educated elite, the specialists, the ignorance of our political and economic leaders and masters who are morally ignorant, incapable of distinguishing between good and evil, the antonym of Myshkin’s innocence of the clean hands of virtue and morality.

Stewart sees a kind of  rhythm in just the bare list of titles that mirrors his choice of the twenty-four plus one pieces of Babylon Falling selected from a short list of thirty-five essays and articles. Some readers might not recognize that same rhythm, he notes, and might have selected other pieces, but he insists on the rhythm created by these.

Essay number 1,“Transformation”, and the last, number 25, “To Be A Communist”, move at an easy and non-complex rhythm, like any prologue and epilogue, literary or musical. In “Transformation” he writes: “The creative individual who does not accept the world as it is is godlike in that like earlier genuine revolutionaries he attempts to not only change it—that is, not only reform it—but to transform it. And there lies a major difference between change and transformation: Change alters the past. Transformation creates the future.”

Numbers 2-11 then complete what Stewart considers the base, the feet and legs of the sculpture he believes his work resembles, a kind of moral preparation for the frontal attacks that will follow. Speaking of the innocence of Myshkin, the protagonist of Dostoevsky’s novel, The Idiot, Stewart writes: “The innocence I am considering in the essay, “Innocence” is precisely Myshkin’s innocence, NOT the ignorance of uneducated, unschooled, unlettered common people. I have in mind instead the ignorance of the sophisticated and educated elite, the specialists, the ignorance of our political and economic leaders and masters who are morally ignorant, incapable of distinguishing between good and evil, the antonym of Myshkin’s innocence of the clean hands of virtue and morality.

However, even in the harder hitting pieces—essays numbers 12-19 which include frontal attacks on the author’s Homeland, The Mother Of All Paradoxes, Americanism, The Impulse For US World Hegemony, Cold War Revisionism, Euphemisms Away—the author does not use a hammer—as other writers might have preferred—but applies a light-weight chisel as if working on a delicate sculpture, which however, he makes clear, is a work in stone. He emphasizes that he seldom uses a hammer to make his points; he prefers to work with a small chisel.

Stewart’s chief message here as elsewhere is a moral one. He makes clear in all his work, fiction and non-fiction, his belief that writing without a moral message is not worth the paper it is printed on. The difference between right and wrong, he says, lies inherent in most of mankind. In his celebrated novel, The Trojan Spy—ironically not actually a spy story, Stewart insists—he notes that Nations commit horrible acts to justify war and since history written by the victors is a lie, we need revisionism, and this revisionism springs from humanity’s indestructible wish to see justice triumph, a morality of history, so to speak. Thus, with time, the pain of defeat, subjugation and torture diminishes but morality remains. Just causes, he reminds us, are always and by definition morally superior to unjust ones, no matter how much propaganda the latter employs to stake its claim to righteousness. The reminder is used by Stewart not as a display of fatuous wisdom, since it is a tautology, but as an acid commentary on the manufactured banishment of any operational morality from modern capitalist society, a vice scnadalously evident in contemporary Anglo-American culture.

A major protagonist in Stewart’s Time of Exile, the final volume of his Europe Trilogy, the Serb resistance leader, Ilya, affirms. “The world is poisoned on evil and seems to like the taste. But now we have reached the tipping point. Not only in Europe, as one might have said during World War Two, but across the globe, everywhere, the evil of willful ignorance reigns. I believe it is time for a total shake-up, a moral realignment, a rethinking of the divisions of our world. My friends, the final battle is brewing.”

About the Author
Patrice Greanville is TGP’s editor in chief.
PATRICE GREANVILLE Speaking of the innocence of Myshkin, the protagonist of Dostoevsky’s novel, The Idiot, Stewart writes: “The innocence I am considering in the essay, “Innocence” is precisely Myshkin’s innocence, NOT the ignorance of uneducated, unschooled, unlettered common people. I have in mind instead the ignorance of the sophisticated and educated elite, the specialists, the ignorance of our political and economic leaders and masters who are morally ignorant, incapable of distinguishing between good and evil, the antonym of Myshkin’s innocence of the clean hands of virtue and morality.

This work is licensed under a Creative Commons Attribution-NonCommercial 4.0 International License.