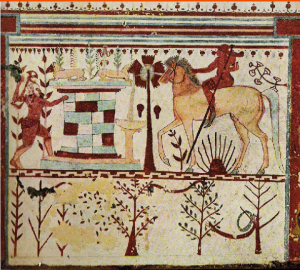 Ambush of Troilus by Achilles, Tomb of the Bulls, Tarquinia

The men fat and sexually ambiguous. The women rich, free and promiscuous. An ancient superstitious life-loving, sea-faring people enriched by an arms industry based on iron and on wine cultivation. By the sixth century BC, while Romans were still barbarians, the enterprising Etruscan people had developed a dynamic society in ancient central Italy which they dominated for centuries. The people partied, the men sailed the seas and fought wars, the women sold love and slaves did the work. The ultimate downfall of their opulent civilization has been attributed to their soft, fun-loving life.