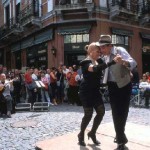 Once again I am back in Buenos Aires. From my two brief visits here years ago only vague memories of this Paris-like Latin American city remain. Though a brutal military dictatorship came and left in the interim, this is still the New World … though for me it seems to be located in the Old. Instead of in a downtown hotel as before, I am living in an apartment in the centrally located barrio of La Recoleta, an area of expensive boutiques and elegant hotels and sumptuous apartment buildings. Nearby is the monumental Cementerio de Recoleta where lie many Argentine notables including Eva “Evita” Peron and Nicolas Rodriguez Pena, for whom my street is named. Lunching outside at the famous Café La Biela (the rod that links certain parts of an automobile), under the spreading branches of the internationally known, 18th century gum tree, one can watch the beautiful people of well-to-do Buenos Aires come and go. Though this was once the café of the automobile racing crowd, hence its name, it was also the favorite café of Jorge Luis Borges and two generations of intellectuals and artists. Today it is the café of a certain chic Buenos Aires. END_OF_DOCUMENT_TOKEN_TO_BE_REPLACED